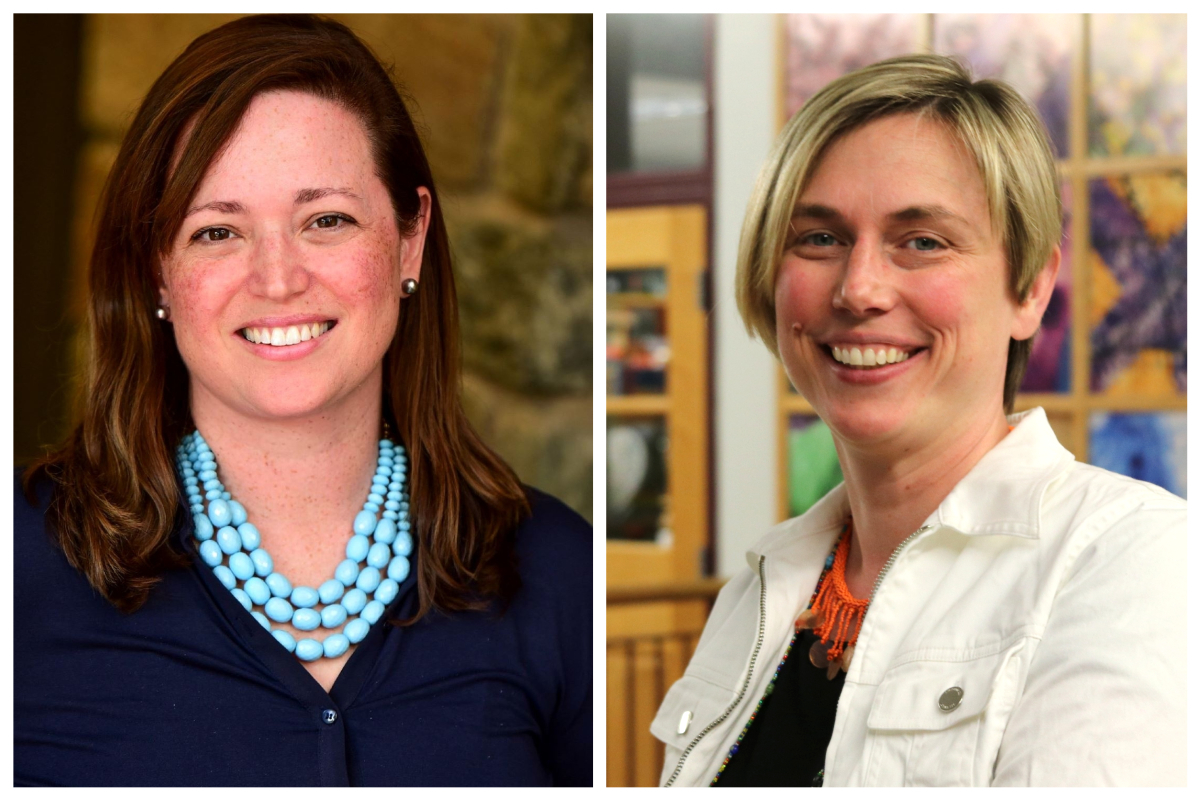 One grew up in Hawaii, knows how to surf, and is a mom to two active boys. The other was raised in Connecticut, played college basketball, and loves re-reading the Harry Potter series with her son. Tara Montague (the Hawaii native) and Erin Duffy (from Connecticut), are two experienced educators who are Landon's next Lower and Middle School heads, respectively.

In a letter to the community on February 15, Headmaster Jim Neill announced the hiring of Montague, the Director of Studies at National Presbyterian School (NPS), and the permanent appointment of Duffy, who served as Interim Head of Landon's Middle School.

"It was a combination of the people, the program, and the possibilities," said Montague, citing three reasons she accepted the position. "The stellar faculty are so focused on meeting students' needs, not just academically but also socially and emotionally. When I visited the school, I could see the mission come to life – a respect for tradition and the timeless values of integrity, honor, and empathy balanced with innovative pedagogy uniquely tailored to boys."

Montague not only knows how to surf and play tennis but also enjoys yoga and running the occasional football route with her family, including her two sons. She is an avid reader. "On my nightstand I have Daring Greatly by Brene Brown, Better by Atul Gawande and one of my favorites, The Lion, The Witch and The Wardrobe, by C.S. Lewis. I recently read The Self-Driven Child by Bill Stixrud and Ned Johnson and highly recommend it to all parents."

Prior to her position as Director of Studies, Montague served as the school-wide learning specialist and as a homeroom teacher at NPS where she has been on the school's faculty for about a decade. With a master's degree in education, she has worked in independent schools for more than 20 years, taught in the Lower School at two all-boys schools — St. David's School (NY) and St. Albans (DC) — and is a product of independent education as a graduate of Punahou School (HI).

"Over the course of two decades, my philosophy on education has remained consistent: every child should be known and loved for who they are," Montague said. "As educators, we need to ensure that when our students walk through the door, they can see themselves on the walls, in the curriculum, and as part of the fabric of the entire school. A student's school experience is not only formative; it has the power to be transformative as well. It is why teaching is an incredible responsibility."

Erin Duffy, who has worked as a Landon teacher and administrator since 2007, agrees with that approach wholeheartedly. "The teacher-coach-mentor model allows us to live out that philosophy well," she said. "We get to know the boys in so many different ways, providing them the opportunity to take academic, athletic and social risks within a safe space and with the support they need."

In addition to her work as the Interim Head, Duffy has served the Landon community for more than a decade as the Assistant Head of the Middle School, Form I Dean, technology coordinator, history teacher, and basketball coach, among others positions.

"I have had the opportunity to hold many different roles at Landon which has allowed me to view the school from a wide range of perspectives," Duffy added. "As a teacher, I was able to engage in the collaborative faculty culture that ensures our students have an enriching holistic experience. As a dean, I worked closely with students and families to implement supports for challenges that extended beyond the classroom. As a Head, I draw from my experiences in these myriad roles at Landon to harness the energy of our various constituencies."

The power of community is one reason Duffy loves J.K. Rowling's Harry Potter series. "I enjoy delving back into the world of Harry Potter because it is set in a school, there is a constant sense of adventure, and the characters of Harry, Hermione and Ron remind me of the inherent goodness of people," she said. "Their actions are inspired by a sense of love and spirit of teamwork that offer compelling models for kids and adults."

When she can set aside the time, Duffy enjoys visiting downtown DC with her family. "I love museums, especially the National Museum of African American History and Culture. My son's current interests lead us to explore the National Air and Space Museum and the Smithsonian Museum of Natural History."